Eighth-grader at Loyola Blakefield is the son of two service members, enjoys playing football and participating in STEM projects 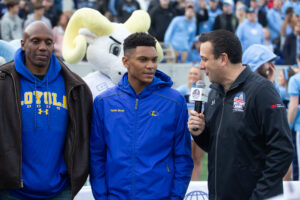 Jayden Moore, an eighth-grader at Loyola Blakefield in Towson, Md., has been selected as the winner of the 2019 3M Play to Win Award presented by the Military Bowl and 3M.

“The 3M Play to Win Award recognizes local youths who are resilient and relish taking on challenges,” said Skip Driessen, 3M Government Markets Marketing Operations Manager. “Jadyen Moore defines the essence of this award and we are thrilled to honor him.”

As the 3M Play to Win Award winner, Jayden will receive four complimentary tickets to attend this year’s Military Bowl presented by Northrop Grumman, benefiting the USO of Metropolitan Washington-Baltimore, between North Carolina and Temple on Friday, Dec. 27 at Navy-Marine Corps Memorial Stadium in Annapolis, Md. Jayden also will receive a prize package and the opportunity to be on the sidelines for the Military Bowl’s opening kickoff.

Jayden comes from a military family. His father, Percy, is an active-duty colonel in the U.S. Marine Corps and his mother, Janice, served six years in the U.S. Navy.

On the football field, Jayden plays quarterback and defensive back for the West Howard County Warhawks and plans to play next year at Loyola Blakefield, where his older brother, Jordan, is the varsity starting quarterback.

At school, Jayden also has a keen interest in STEM projects. He is a member of the computer science club and robotics club at Loyola, where he carries a 4.0 grade-point average. Jayden said that the thinking involved in STEM is similar to the way he thinks on the football field.

Jayden also recently received the GoodSports Award at Howard County’s annual Celebration of Sports in recognition of his action and behavior on and off the field.