The Military Bowl presented by Northrop Grumman 2017 Volunteer of the Year is Aaliyah Lambert. 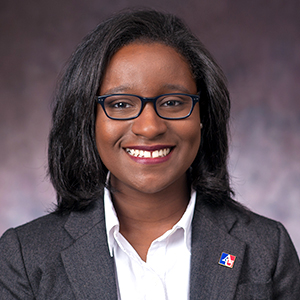 Aaliyah is a senior at American University, where she is majoring in public relations and strategic communications with a minor in business and entertainment. She aspires to a career in the sports industry. She was a marketing and communications intern for the Military Bowl in 2016 and returned to help the Bowl again this past year.

If anyone ever had questions about Aaliyah’s work ethic, they should know this story: On the night of the 2016 Military Bowl, after returning home to campus from Navy-Marine Corps Memorial Stadium, she worked a dormitory front desk shift from 2 to 9 a.m.

So when Aaliyah volunteered to help with this year’s Military Bowl, the staff was excited to have her back on the team during Bowl Week. Aaliyah was the point person for the spouse’s event, which included lunch and a visit to the National Museum of African American History and Culture, as well as a Navy team dinner at the historic Ben’s Chili Bowl. Aaliyah also pitched in as a staff photographer at events and helped with social media coverage throughout the week.

Her other internships have also included the Sports and Fitness Industry Association, CommCore Consulting Group and the Washington Wizards.

“Aaliyah was a terrific help to our team during the busiest time of the year,” Military Bowl President & Executive Director Steve Beck said. “She shares in our commitment to honoring our nation’s service members and we are very appreciative of her dedication to helping the Military Bowl be the best that it can.”