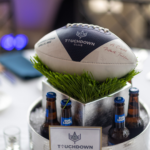 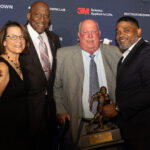 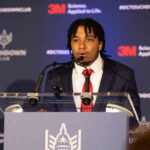 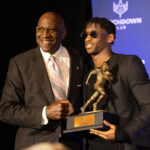 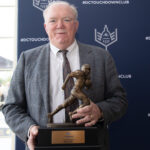 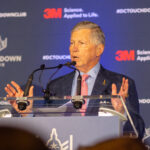 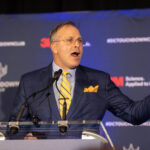 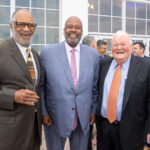 After being canceled the past two years because of the COVID-19 pandemic, the DC Touchdown 3M Awards Dinner made a triumphant return honoring the best and brightest in the National Capital Region football community.

“What an incredible night!” Military Bowl Foundation President & Executive Director Steve Beck said. “It was amazing to see so many familiar faces and so many people devoted to the sport of football and raising money for Patriot Point. Congratulations to all of the award winners!”

Legendary Washington Redskins offensive lineman Joe Jacoby was presented the Touchdown Club’s Founder’s Award and had much of the crowd laughing as he remembered tales from his playing career.

Following dinner, University of Maryland Coach Mike Locksley introduced the B-11 Foundation, which is being started in memory of former local high school player Bryan Strittmatter; the Military Bowl Foundation presented a check to Strittmatter’s brother, Sean, in his honor.

Foursomes and sponsorships are available for the Touchdown Club’s next event, the DC Touchdown Club Golf Outing on Tuesday, June 14 at Whiskey Creek Golf Club in Ijamsville, Maryland.

TICKETS NOW ON SALE FOR 2022 MILITARY BOWL PRESENTED BY PERATON