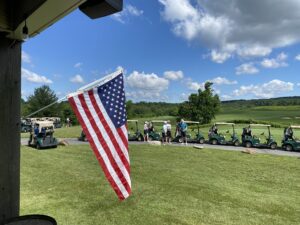 It was a chamber of commerce afternoon, with mild temperatures and a partly sunny sky providing peak conditions amid the rolling landscape as the tournament raised money for Patriot Point, a nearly 300-acre retreat for recovering service members, their families and caregivers on Maryland’s Eastern Shore.

“What an amazing day!” Military Bowl Foundation President & Executive Director Steve Beck said. “It was wonderful to be surrounded by so many familiar faces and to meet new people who share in our commitment to supporting our nation’s service members.” 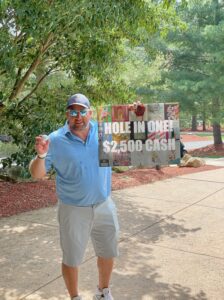 The field included several members of the Military Bowl Foundation Board of Directors as well as the DC Touchdown Club Executive Committee. Two-time Super Bowl champion Clarence Vaughn joined the group, as did several veterans, including U.S. Army (Ret.) Lt. Col. Enrique Young, who made a hole-in-one at the DC Touchdown Club 2019 Golf Tournament, and several veteran service members. Leashes of Valor CEO and Co-Founder Jason Haag, whose group is a partner of Patriot Point, spoke to the participants after the round.

“I can’t thank Patriot Point enough for everything you are doing. It has been phenomenal,” said Haag, who played in the tournament and whose group recently completed a 10-day training with veterans and their new service dogs at Patriot Point. “You are saving lives.” 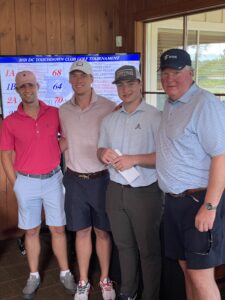 The Byrne family foursome of Jeb, Will, Luke and John won their third DC Touchdown Club Golf Tournament in the past four events. Will Byrne also won the longest drive competition. Evan Silverman hit his second career hole-in-one on No. 11 to win the closest to the pin contest.

See pictures from the tournament by visiting our Facebook page.

The Military Bowl Foundation’s next event is the Home of the Free … Because of the Brave dinner on Thursday, September 9.