Recovering service members, their families and their caregivers from Walter Reed and Fort Belvoir enjoy a great night at one of the region’s best restaurants

More than 40 recovering service members, their families and their caregivers were guests as the Military Bowl Foundation and board member Paul Norman hosted the 16th annual Home of the Free … Because of the Brave dinner at Fogo de Cháo restaurant on Thursday night.

The dinner brings together recovering service members from Walter Reed National Military Medical Center in Bethesda, Md., and Fort Belvoir Community Hospital on the opening night of the NFL season for a wonderful meal. 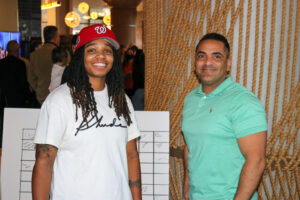 “It is great to be back here and celebrating being Americans,” Norman told a crowd of more than 200 attendees. “It’s even better to be here with the service men and women who allow us the opportunity to do this, our guests from Fort Belvoir and Bethesda.”

“We always tell our service members, ‘Thank you for your service,’ ” said USO National Capital District Executive Director Lisa Marie Riggins. “Showing the gratitude with commitment and real support, that really means something to service members. An event like this goes above and beyond. This is a five-star event that they enjoy. This is the real deal. That’s what tonight is about for these service members.”

Following a cocktail hour, Norman welcomed guests and then introduced U.S. Army (Ret.) Col. Gregory D. Gadson, who emphasized to the crowd that everyone has a responsibility to contribute to the nation’s security. 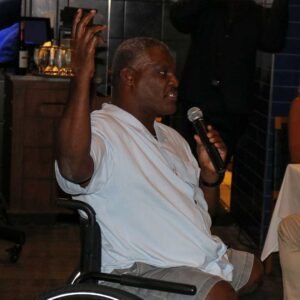 After that, it was a night of football, food and fun.

“When you’re in the military and with a unit, you enjoy the camaraderie, but when something happens to you, you are no longer with your unit and you miss being a part of the group,” said Nathan Sherk, a 32-year U.S. Army veteran who was serving in Kuwait when he had internal bleeding and became anemic. “This is an opportunity to reconnect and make new friends. It’s lonely and boring sitting in the barracks. This is a nice night out.”

The recovering service members also were invited to attend this year’s Military Bowl presented by Peraton, on Monday, December 27 at Navy-Marine Corps Memorial Stadium in Annapolis.

“When you are injured, it can be difficult,” said Shauna Conmy, who was serving in U.S. Army aviation operations when she sustained a knee injury while training. “Being able to have an opportunity to go with people you know and I like meeting new people as well, it’s really nice to not be stuck in your room.”

Not only is the dinner a welcome reprieve for the service members, it also makes an impact on the other attendees, whose ticket purchase pays for their meal and that of a service member. Norman noted how the event has grown over the years and now regularly fills the entire restaurant. Proceeds from the dinner benefit Patriot Point, the Military Bowl Foundation’s retreat for recovering service members, their families and caregivers on Maryland’s Eastern Shore.

“The support for this event is amazing,” Military Bowl Foundation President & Executive Director Steve Beck said. “We are honored to have these men and women from Walter Reed and Fort Belvoir in our company and be able to show our appreciation for their service to the nation.”