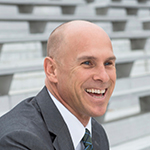 Brad Edwards became the fifth athletic director in George Mason’s history on July 1, 2014. He began his work in intercollegiate athletics in 1999 after a successful nine-year career in the NFL, joining the University of South Carolina Athletics Department where he ultimately served as senior associate athletics director and chief financial officer. Additionally, he was the department’s administrative coordinator for their 2001 and 2002 Outback Bowl appearances, as well as, oversaw design, development, construction, and operation of the 18,000 seat Colonial Life Arena. In 2009, he joined Newberry College as director of athletics and was the vice-chair of the Division II Football National Championship Committee. Later Edwards served Newberry College as both senior vice president for Intercollegiate Athletics and for Institutional Advancement. In 2012, he was named athletic director at Jacksonville University where he also served as a member of the TaxSlayer.com Gator Bowl Chairman’s Club Committee in 2014.

Edwards was a standout athlete for the University of South Carolina Gamecock football team, earning second-team All-American honors after the 1987 season. He went on to play free safety in the NFL for nine seasons after being drafted in the second round of the 1988 draft by the Minnesota Vikings. He also played with the Washington Redskins and Atlanta Falcons and was a defensive co-captain and runner-up MVP with the Redskins Super Bowl XXVI championship team. He was a USA Today All-Pro, a UPI All-NFC selection, and is a member of South Carolina (statewide) athletic Hall of Fame. In 2016, he was voted by NFL.com, as having had the 36th Best Individual Performance in Super Bowl history.

Edwards earned a bachelor’s degree in business management from the University of South Carolina and a master of arts in education from Michigan State University. He is a graduate of the Harvard Business School’s Strategic Marketing Management Executive Education Program, as well as the Executive Management and Leadership Program at the Massachusetts Institute of Technology (MIT). Additionally, Edwards is a graduate of the Sports Management Institute, an academic alliance between the business schools and athletic departments of the Universities of Southern California, Notre Dame, North Carolina-Chapel Hill, Texas-Austin, Michigan and Georgia.