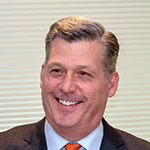 Mac Curtis, a results-oriented and hands-on executive with more than 30 years of leadership experience in federal government contracting, is the chairman and chief executive officer (CEO) of Perspecta (NYSE: PRSP). In this role he leads a public company of more than $4.2 billion in revenue and 14,000 people who support customers in the defense, intelligence, civilian, health care, and state and local markets. Prior to leading the creation and launch of Perspecta, Curtis was the president and CEO of Vencore, Inc., a defense and intelligence contractor he grew from $680 million to $1.2 billion over four years through organic growth strategies and acquisitions. Before Vencore, Curtis served as president and CEO of Vangent, an information management and business process outsourcing company, which he subsequently sold to General Dynamics in 2011 for $980 million. He also held senior leadership positions at Pearson government solutions and DynCorp International and served as an advisor to Veritas Capital during his career. Curtis was named one of the fifty “Most Influential Virginians” in the March 2020 issue of Virginia Business magazine and has been recognized on numerous occasions for his business and community accomplishments. He won the prestigious Greater Washington GovCon Award for Executive of the Year in the greater than $300 million category in November 2019.  He also recently led an effort to raise nearly $1.5 million for the American Heart Association as chair of the 2020 Heart Ball, held in February 2020.  Curtis holds a bachelor’s degree in civil engineering from the Virginia Military Institute.