Tickets are on sale now for the 2022 Military Bowl presented by Peraton, benefiting the USO. This year’s game will be played on Wednesday, December 28, at Navy-Marine Corps Memorial Stadium in Annapolis. Starting at $40, tickets can be purchased online or by calling 470-639-8241.

The 2022 Military Bowl again matches teams from the ACC and the American Athletic Conference, Kickoff is set for 2 p.m. ET and the game will be televised on ESPN.

“We can’t wait to bring two teams to the National Capital Region for a great Bowl Week and get back on the field,” Military Bowl Foundation President & Executive Director Steve Beck said. “It has been especially challenging to have our Bowl canceled the past two years, but knowing the impact the Bowl makes for the nation’s service members only strengthens our resolve and passion to host another great game this year.

“It will be so special to continue our terrific annual traditions such as the Military Bowl Parade led by the world-famous Budweiser Clydesdales and the great Military Bowl Tailgate. We look forward to hosting Medal of Honor Recipients and enjoying a special gameday.”

Stadium seating is priced from $40 to $100. Information on suites and hospitality packages is available at militarybowl.org. All ticketing for this year’s Bowl will be mobile.

Gameday kicks off at 10 a.m. ET with the Military Bowl Official Tailgate showcasing military displays, games and music, with food and beverage available for purchase. At the same time. the Military Bowl Parade steps off at City Dock and concludes at the stadium, featuring the world-famous Budweiser Clydesdales, Medal of Honor Recipients, pageant winners and a variety of youth, community and military-themed groups.

In the 2019 Military Bowl, North Carolina and Hall of Fame Coach Mack Brown rode a high-powered offense to pull away for a 55-13 victory over Temple.

In addition to supporting the USO, proceeds from the Bowl also benefit Patriot Point, the Military Bowl Foundation’s 294-acre retreat for wounded, ill and injured service members, their families and caregivers. 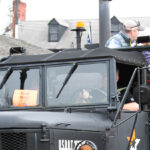